In the African American community having conversations about mental health is seen as taboo. As a people, we take pride in our resilience and ability to overcome atrocities: slavery, sharecropping, Jim Crow, the Civil Rights Movement, and modern-day discrimination. There is this narrative that black women have to be resilient, self-reliant, and independent. Black men have to adhere to rigid masculinity standards, which includes refraining from expressing emotion. These embedded ideas have been passed down for generations and are causing severe harm.

Despite many believing that mental health issues are a "white thing," according to the United States Department of Health and Human Services, black people are 20% more likely to suffer from a mental disorder and 50% less likely to seek treatment than a Caucasian. Many of us have avoided seeking help because of not wanting to be seen as "weak" or "crazy" by our peers. People in the black community tend to rely on social groups, family, or religion to cope even if the issue is not properly addressed. A phrase I heard while growing up is "pray about it." A common belief is an individual's misfortunes are due to their spiritual frailty which detours the person from getting the help they desperately need.

Black males face scrutiny when expressing their feelings, due to this idea that they must maintain a "tough" facade. This causes them to accumulate their feelings, which can manifest into an outward expression of anger. According to a report in 2010 by the Centers for Disease Control and Prevention (CDC), suicide is the third leading cause of death in black males from ages 15-24. This can be attributed to the lack of healthy outlets and conversations about their internal well being. Movements on social media such as #YouGoodMan and #BlackBoyJoy have been encouraging black males to tear down this stereotype.

No matter the race, women are more likely to experience mental health issues than men. The exact reason for this is debated. Some believe that depression impacts both genders equally, but it is difficult to obtain an accurate count for men. Others argue that women are more vulnerable to internal and external stressors.
---
The myth of the "strong black woman" has been perpetuating the black community for generations. There is this belief that black women are not vulnerable to life's struggles or pain, as women in other races. This unwavering strength has been required due to black women, traditionally, being assigned the role of nurturer and breadwinner of their family. According to the U.S. Census Bureau, only 38.7 percent of black children are raised in a two-parent household. The remaining of the children-- more often than not-- are raised by single mothers. Due to this, black women suppress their negative emotions and put on a happy face to not cause panic. Media outlets have adopted these images (of our grandmothers, aunts, and mothers) and have portrayed the "black superwoman" on films and series. This does provide positive representation, but causes an overwhelming amount of pressure to live up to this model. This portrayal also negates to show the internal turmoil that black women, in reality, do experience.

Black children-- as do all children-- absorb both the negative and positive traits of the grown-ups around them. The youth are learning from adults to withhold their feelings. Due to this learned behavior and other external factors (exposure to traumatic events, lack of availability to therapists, and socioeconomic factors) has caused a spike in suicide among black youth. According to a 2015 study by the CDC, the suicide rate amongst black children ages 5 to 11 has doubled from 1993 to 2013. This can be seen by the constant news headlines: McKenzie Adams (9), Rylan Thai Hagan (11), Kevin Reese Jr. (10), Seven Charles (10), and many others.

Growing up, I suffered from depression, but I was not diagnosed until around the beginning of high school. A person could have depression because of genetics, an imbalance of chemicals in the brain, and external factors. For me, depression runs on both sides of my family. Anyone who was close to me could easily recognize the signs: oversleeping, isolating myself, lack of human connections, and irritability. To cope with my emotions, I would constantly keep myself occupied by track, coursework, volunteering, and finding random opportunities. I never stayed still long enough to acknowledge my emotions. This finally caught up to me during my senior year of high school. I began to be physically impacted due to mental psych. When I felt overwhelmed, I would collapse (blackout) on the ground in public or at home. This led me to address my mental well being in conventional and unconventional ways--including having a fake funeral in South Korea.
---
In the last few decades, South Korea has gone from being a nation struck by poverty to an industrial power. Meanwhile, during this same time, the rates of suicide and depression have also risen. South Korea has one of the highest suicide rates in the industrialized world and the Organization for Economic Cooperation and Development countries (OECD). This is due to many factors such as the influence of Buddhism and Confucianism philosophy that emphasizes stoicism, highly competitive work and school environment, and economic reasons.
---
On July 16th, I participated in a near-death experience. The entire program lasted 2 hours and 30 minutes. First, all of the participants took head shots in the reception room. After, we went to a connecting room to listen to a fifty-minute lecture. The entire lecture was in Korean, which I do not speak. Thankfully another participant translated it for me. Next, we all went to a room filled with wooden coffins. In here, I wrote my "final words" and was enclosed in a coffin for a few minutes. While in the coffin, I was consumed by a weird sense of peace and thought about the choices I wanted to make in my life. 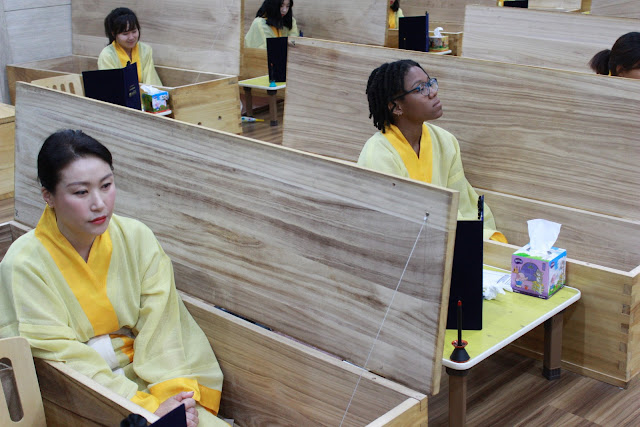 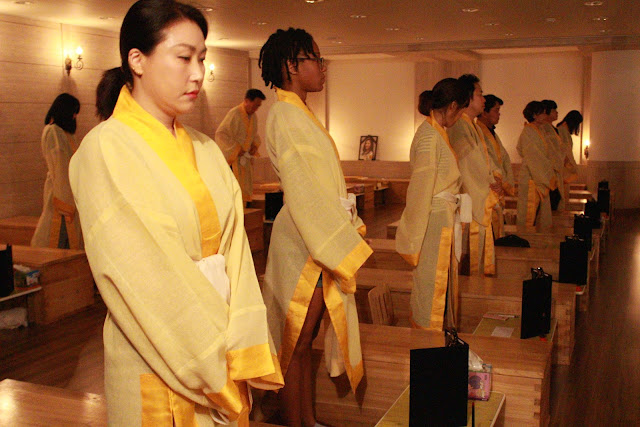 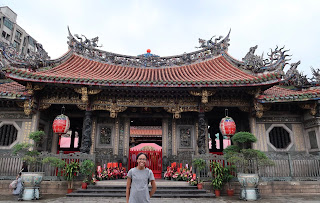